For a good number of COVID19 patients that need ventilators, the ventilators is used as end of life care.   As such it appears to me to be the opposite of palliative care.   Using a ventilator in this context increases suffering by the patient.  Once the ventilator is inserted, a large portion of patients will live out the rest of their lives that way.   It may be more optimal in terms of quality of remaining life to not use the ventilator.

The survival prospects for COVID19 are low after ventilators are inserted.   The problem is that the survival prospects are high enough to recommend using them.   There is at least a 50/50 chance of surviving with a ventilator compared to near certain death without it.   Those odds justify the use of ventilators and we trade off the end of life suffering of those who die with the prospects of a full recovery of the rest.

The ones who die under ventilators will not be around to complain about their experiences.

Also in that post is an observation that ventilators are themselves harmful.   In particular the use of pressurized pure oxygen will permanently damage the lungs.   The pressure hardens the tissues making it necessary to increase the pressure.   The use of pure oxygen may have its own poisonous effects.

Meanwhile, we are told that COVID19 survivors end up with permanent lung damage that is not typical for other pneumonia conditions.   As presented to me, the damage is directly attributed to ravaging effects of the COVID19 infection.   Another explanation may be that much of this lung damage may come from the treatment instead of the disease itself.

In particular, the ventilator use may be what damages the lungs in many cases.

The distinction does not really matter to the patient.   I imagine most patients appreciate their continued life despite the damage to their lungs.

The distinction is important from a government policy perspective, especially we are using a technology that converts an acute illness into a chronic one that will need to be managed for many years or in some cases many decades.

To be clear, it is great that the technology is able to save the lives.

From a policy perspective, the importance of distinguishing the cause of lung damage to ventilator use instead of COVID19 itself is that it lessens to value of ventilators.   The value is still there, of course, but it is not as valuable as presented by government to justify the obsession with increasing ventilator inventories and managing their distribution.

From a policy perspective there is a opportunity choice to make.   One, the government devotes resources to acquiring and managing ventilator inventories. Or two, the government devotes resources to finding a way for future patients to never need ventilators.   It appears to me that we have decided on the first option, thus condemning future survivors to endure the lung damage from ventilators.

Summarizing the above, proper attribution of the cause of lung damage to ventilator use instead of COVID19 fundamentally changes the data to feed the algorithm of policy making.   Ventilator supply may be important but maybe not be as important as we are led to believe.

Similarly I’m seeing other areas where numbers are attributed to COVID19 instead of other explanations.

As I mentioned in earlier posts, many of the complications that lead to need for hospitalizations are consequences of acquiring COVID19 while already suffering from preexisting condition already under active medical management to extend their lives.   It appears that the current practice of filling out death certificates is to attribute any death to COVID19 as long as the patient had a positive test result for the virus.

With preexisting or coexisting conditions, it is ambiguous to determine what is the actual cause of death.   Perhaps someone with extreme heart disease does die from heart failure, that failure was hastened by the viral infection.  The death may have occurred not long later, but it was the virus’s fault to bring the death sooner.

From a policy perspective, this distinction matters.   If we were to record the death as a result of the heart condition, then the premature death due to virus would skew the statistics about effectiveness of the patient’s heart treatment.   But the alternative to attributing the death to the virus skews the statistics of the virus’s fatality rate.

To be clear, I am aware that many people are dying from the disease when previously they were young and healthy without any diagnosed conditions, so everyone is at some risk of dying if they contract this disease.

I am just thinking about the current obsessions over daily death tallies.   The numbers look alarming to most of the population that never before paid attention to normal numbers of people dying every day, including the normal number of people dying in hospitals while being treated for other infectious diseases such as the flu.

In the Virginia state department of health reporting on deaths related to pneumonia and influenza, there is a sudden drop in deaths at the time when the number of deaths due to COVID19 started to rise as shown in the charts below reported on April 2. 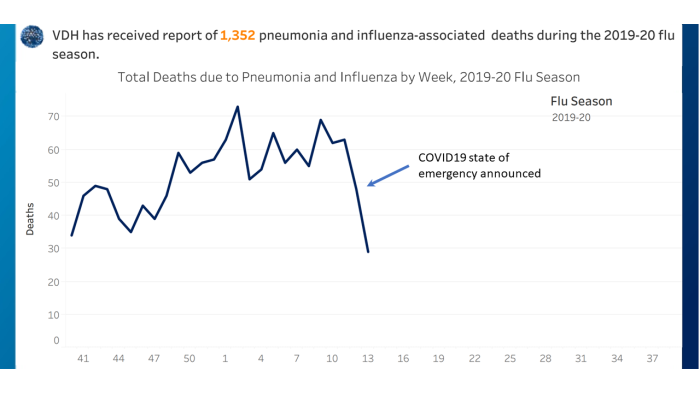 this is the same chart a couple weeks later (I expect this is some error, but it is curiously consistent with the above):

The following chart compares cases with previous years showing that this is the time when these cases naturally decline but still it appears that this year is dropping faster than other years. 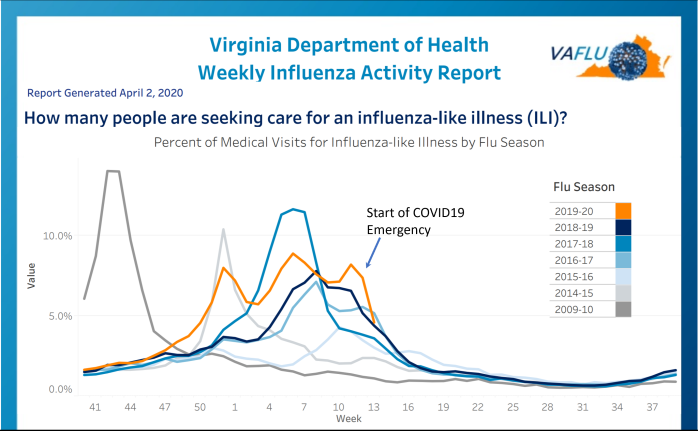 I realize the numbers are still preliminary and too early to see the trend for the tail, but it at least raises a suspicion that deaths that otherwise would have been attributed to influenza is now counted as COVID19, presumably because the patients also tested positive for COVID19.

If the recently reported COVID19 deaths in Virginia were included in the numbers above, there would be no noticeable deviation from normal numbers.   Instead, if deaths that normally would have been attributed to influenza are now attributed to COVID19, the trend is alarming because that trend starts at zero and has zero for all previous years.

Because there is no prior data for COVID19, we have no historical model to predict future rates.   In such cases, our preferred models are dark-data mathematical models that predict exponential growth for many weeks to come.   Those models justify the recent government orders to stay at home, enforce social distancing, and close presumed non-essential businesses.

Many of the COVID19 deaths involve patients with coexisting conditions that could also prove fatal.   Thus the deaths due to COVID19 will have an artificial impact on evaluating outcomes of those conditions.   In the example of the heart disease patient undergoing treatment, his death due to COVID19 positive status will make it appear that his treatment averted his death due to heart disease.   I assume that the analysis takes this into account within the medical profession, but eventually there will be a decline in number of deaths due to these other conditions, making it appear like we are making progress for those treatments.

There are similar problems with the mere calculation of the fatality rate of this disease, especially in USA where we only test when people have symptoms that reach a level that justifies the test.   There could be many more people with the disease who don’t recognize their symptoms, or suspect their symptoms are COVID19, or decide not to report it out of fear of being quarantined or hospitalized.   That last fear may be justified when that person does not have money to pay for out of pocket expenses because of government-imposed unemployability due to having a career in non-essential businesses.

It may be too early to get these numbers right at this time, yet government must act now.  It chooses to act on the worst case assumptions.

Projecting from these assumptions, we are predicting the impact on the medical system.

One of those predictions is the remains days before we run out of ventilators.   This being alarmingly short, turns the priority to ventilator procurement and rationing such as postponing elective preventive surgeries.

Ventilators may not be the best choice for investing so much of our resources and attention.